Ex: Bromberg II, 524 (this coin) Superior Galleries (10 December 1992) according to the prices realized this coin brought $357.50+10% in this auction. It's interesting to note that similar coins without the detailed provenance are now fetching nearly 300%+ or more these days. I suspect that this would likely be priced similarly considering where the market is presently.


On August 4, 2007, David Hendin wrote that this is "...quite a nice coin, " but when asked about rarity, he suggested that I take a look at Leo Mildenberg's The Coinage of the Bar Kokhba War (Typos VI; 1984). I then requested a copy from the Library.


While reviewing the copy, I came across the plate that pertained to this particular type of coin namely Mildenberg 172-186. When I looked at the photo for Mildenberg 183 (actually 183.7), I was utterly astonished. It was indeed the same coin. I compared photographs, then the coin to the plate, then enlarged the plate photo, comparing various points of reference. To me, all points of reference matched. I then contacted David Hendin again, and provided him with the photo that appears above and then an enlargement of Mildenberg 183 for comparison. He wrote back to say "i'd say that's a match". (cf. enlargement of Mildenberg 183 below) Mildenberg noted only 15 coins from these same dies: 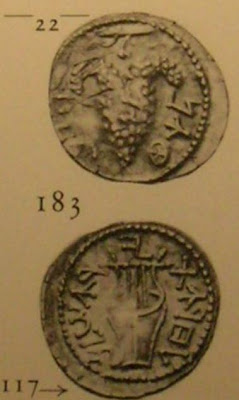 The next question that arose was, now that it is identified as a Mildenberg plate coin, how did Mildenberg come by it. According to the notes adjacent to 183.7 (this coin) is that it was in the stock of Leu AG, Zurich 1973, 3.46 [the gram wt. , which was confirmed when I weighed the coin upon receipt]. More importantly, it was noted as Ex: Beit Mirsim.

In early 2009, I was able to purchase a set of the catalogues from the Abraham Bromberg Collection, on a hunch that based upon the fact that this coin had been a Mildenberg plate coin, and that it was in superb condition, I had a suspicion that this coin was perhaps a part of the Bromberg Collection on that basis alone. The hunch proved correct as the coin was in fact Bromberg II, 524 though apparently wrongly identified in the catalogue as El Fawar Hoard.


"Beit Mirsim 1973/1974, In the Hebron hills, about 17 km SSW of Idna. During December 1973 through January 1974. At least 100 Bar Kokhba silver coins (tetradrachms and denarii) and some bronzes together with Roman issues: 1 aureus of Vespasian, about 100 denarii from Vespasian to Trajan including 1 Julia Titi, 30 Hadrianic denarii, 150 Syrian tetradrachms and a few tridrachms from Caesarea Cappadociae. (Nearly all the Trajanic drachms were of the Arabia type with the camel.)"

According to Carta's Official Guide To Israel (1983) Beit Mirsim is an "Arab village on border of Hebron Hills and Judean Foothills. Pop.: 200. Nearby is Tell Beit Mirsim." 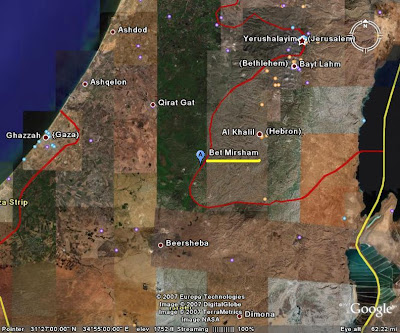 Town underlined in yellow is site of Beit Mirsim where this coin was found in a hoard in 1973-74.

photo adapted from one appearing at www.moneymuseum.com, a recommended site. 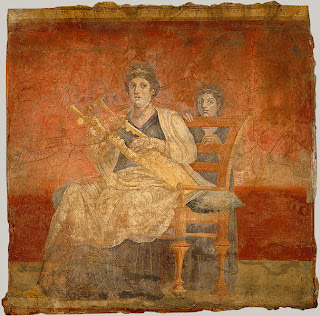 Ex: card accompanying coin indicates that it was purchased from Blanchard & Co by a prior owner, perhaps as an investment, card notes “Alexander the Great Drachm No. 79055”.
Blanchard & Co is a numismatic investment firm in Louisiana, USA, a call to them revealed that the ID number (as I suspected) did not mean anything to them. In fact, they have not sold these coins for 15 or 20 years and have no records relating to them according to the CSR who responded to my questions. The CSR inquired if I would like to know the value of the coin, if so I would have to send it to him and he would in turn send it out to an ancients dealer for appraisal.
I thanked him and said that it would not be necessary. A tetradrachm of similar origin had a different ID number from Blanchard, which obviously means nothing by way of provenance either.

Portion of map from: 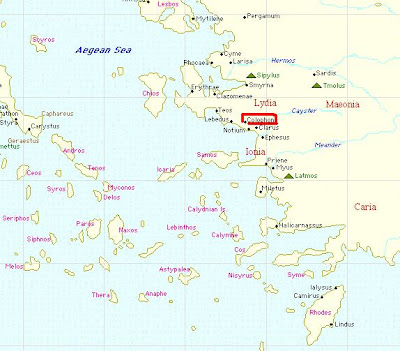 map showing location of Colophon where this coin was minted, highlighted in red
Sear writes in his Greek Coins & Their Values (Vol. II; p. 399) that Colophon (spelled by him Kolophon) was "...situated several miles inland, on the river Halesos, Kolophon was an important city and claimed to be the birthplace of Homer. The famous oracle of Apollo Klarios was within its territory."


Peter Green in his Alexander to Actium (p. 59) notes that Epicurus (BCE 341-271/270) was residing in Colophon at the time the coin illustrated above was minted, noting that Epicurus resided there from BCE 321-306 after being exiled for a second time from Samos.
Posted by JG at 07:26