Ex-Braithwell Hoard The Braithwell Hoard was discovered in 2002 in South Yorkshire UK by a Metal Detectorist. It contained 1331 antoniniani, the vast majority of which were of the Romano-Gallic empire. Richard Abdy and J.D. Hill have recorded the hoard, and will be publishing the full details in the near future. This coin is from that hoard and has been assigned a "Braithwell" number per the preliminary hoard report.

This coin as with many others from this hoard is likely ex-CNG since CNG had 1,161 of the 1,331 coins being sold through their "coin shop" on-line. There were 11 lots of 100 coins each being sold by CNG as well, this coin may originate with one of those lots.

Description: The 1,331 coins are all ranging in issue dates from AD 253-274, the group is very typical in composition of the many Romano-British coin hoards buried between the fall of the breakaway Gallic Empire in AD 274 and the establishment of the British Empire of Carausius in AD 286.Central Empire:

Note: Thirteen medium to large sherds from a single reduced grey ware jar were recovered with the hoard. These sherds came from the same vessel that appears to have been only recently broken. The sherds include more than half of the rim of the vessel and part of the upper vessel wall. This is unusual, as in most coin hoard cases only parts from the base and lower vessel wall are recovered. No base sherds were recovered with this hoard. Weighing 632 grams (mean sherd weight 48.6g), these sherds come from a jar with a rim diameter of about 8cms and a maximum girth of about 16-18 cms. The inside of the pot is stained green with a bronze patina due to contact with the coins. This shows that the coins were originally contained inside the jar. Grey ware vessels were a common coarse ware made throughout Roman Britain.

Disposition: Four coins acquired by the British Museum and one by Doncaster Museum; the remainder returned to the finder.

Method of discovery: Whilst searching with a metal detector. 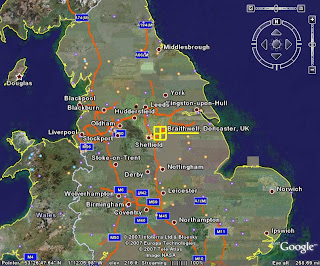