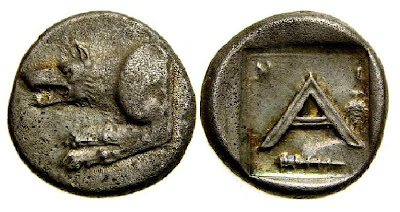 
Rev: Large A; N I above on either side; club below; bunch of grapes to right; all within shallow incuse square.

In the Numismatic Chronicle Vol. XVI (1853-1854) the following is noted by W.S. W. Vaux dated 27 May 1852, entitled "Extract of a letter from Chas. T. Newton, Esq., Her Majesty’s Vice Consul at Mytilene, to Mr. Burgon, of the British Museum, chiefly relating to a hoard of coins of Alexander the Great, discovered near Patras, in 1850”

“These coins are said to have been found in a vase by a peasant. With them were found a number of tetradrachms of Athens, two tetradrachms of Sicyon, several tetradrachms of Aetolia and other silver coins, and also, it is said, some gold coins of Alexander the Great, but these have not been preserved.”


also cf. Newton's own text where he describes the find (though not much differently from the description in the NC eleven years earlier) in his Travels & Discoveries in the Levant (London; Day & Son, 1865, in two vols) cf. vol. 1, pp. 26-28.

Here is the link to the Google Books version: 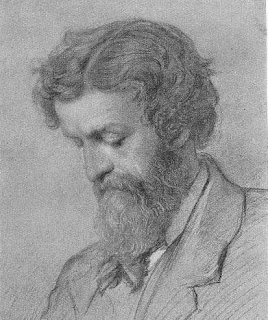 The following information is from : http://eng.archinform.net/arch/58477.htm
As is the illustration of C.T. Newton


Sir Charles Thomas Newton (September 16, 1816 – November 28, 1894) was a British archaeologist.
Newton was born at Bredwardine in Herefordshire, and educated at Shrewsbury School and Christ Church, Oxford. He entered the British Museum in 1840 as an assistant in the Antiquities Department. Antiquities, classical, Oriental and medieval, as well as ethnographical objects, were at the time included in one department, which had no classical archaeologist among its officers.
In 1852 Newton left the Museum to become vice-consul at Mitylene, with the object of exploring the coasts and islands of Asia Minor. Aided by funds supplied by Lord Stratford de Redcliffe, then British ambassador at Constantinople, he made in 1852 and 1855 important discoveries of inscriptions at the island of Calymnos, off the coast of Caria; and in 1856-1857 achieved the great archaeological exploit of his life by the discovery of the remains of the mausoleum of Halicarnassus, one of the seven wonders of the ancient world. He was greatly assisted by Murdoch Smith, afterwards celebrated in connection with Persian telegraphs. The results were described by Newton in his History of Discoveries at Halicarnassus (1862-1863), written in conjunction with R. P. Pullan, and in his Travels and Discoveries in the Levant (1865).

These works included particulars of other important discoveries, especially at Branchidae, where he disinterred the statues which had anciently lined the Sacred Way, and at Cnidos, where Pullan, acting under his direction, found the colossal lion now in the British Museum.In 1855 Newton declined the regius professorship of Greek at Oxford. In 1860 he was made British consul at Rome, but had scarcely entered upon the post when an opportunity presented itself of reorganizing the amorphous department of antiquities at the British Museum, which was divided into three and ultimately four branches. The Greek and Roman section naturally fell to Newton, who returned as Keeper, and held the office until 1885, declining the offer of the principal librarianship made to him in 1878. The Mausoleum Room, to accommodate the treasures he had found in Asia Minor, was built under his supervision, but the most brilliant episode of his administration was the acquisition of the Blacas and Castellani gems and sculptures. The Farnese and Pourtals collections were also acquired by him. He took a leading part in the foundation of the Society for the Promotion of Hellenic Studies, the British School at Athens, and the Egypt Exploration Fund. He was Yates professor of classical archaeology at University College, London, from 1880 to 1888. His collected Essays on Art and Archaeology were published in 1886. When, on his retirement from the Museum, his bust by Boehm, now placed in one of the sculpture galleries, was presented to him as a testimonial, he desired the unexpended balance to be given to the school at Athens. After his retirement he was much occupied with the publication of the Greek inscriptions in the British Museum, but his health failed greatly in the latter years of his life. He died at Margate. He married in 1861 the daughter of his successor in the consulate at Rome, the painter Joseph Severn, herself a distinguished artist. She died in 1866.

Additional Notes:
Patras hoard is assumed to have been buried during the invasion by Philip V in 219 B.C. according to one source, though according to IGCH, the date was BCE 218 and it is credited to Troxell.

In Peter Green's book Alexander to Actium, the following chronology is provided for the period of BCE 219-218 that make both appear as equally likely candidates for deposition; BCE 219: Lycurgus (King of Sparta) invades Argolid, declares war on Achaea. Philip V (of Macedonia) invades Aetolia and Acarnania. BCE 218: Philip V's invasion of Aetolia and Laconia. 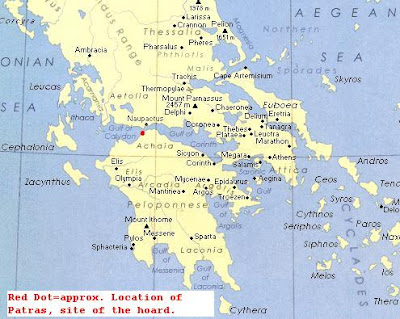 The IGCH further reports that the contents of the hoard found c. 1850 in Patras consisted of a 125 coin + pot hoard. Apparently there appear to be some discrepancies that might raise the estimate to 155+ at most.

She describes the hoard as "A large and important hoard containing several miscellaneous earlier silver coins, possibly several staters of Alexander, 5 Aetolian pseudo-Alexanders, and 92-127 Alexanders (there is some uncertainty about three classes), most of the Peloponnesian." (p.86)

She continues writing: The hoard has been dated by Newell to the late Third century B.C. ...and to the third quarter of the third century by Hackens....although, in discussing possible occasions for its interment, Hackens goes as late as 220, strictly speaking later than the "third quarter".


I prefer to date the Patras Hoard's burial even a few years later. Granted that any coastal town near Aetolia must have had constant reason for guarding its possessions, the prime period for hoard burial in the late third century must have been the time of the Social War. Polybius lists any number of possible occasions during these troubled years for our hoard's burial: 220: Aetolians' pillage of Patras....;Aetolians and Illyrians march through Achaea, and back again...;219: Aetolians and Eleans battle with Dyme, Pherae, and Tritaea,...;218: Philip marches through Patras and Dyme to Elis.....;Philip sails from Corinth to Patras with 6000 Macedonians and 1200 mercenaries.....; winter 218-7: Aetolians and Eleans pillage territory of Dyme, Pherae and Patras.....; spring 217; Aetolians and Eleans march from Elis through territory of Pherae and Aegium....


The period of the Social War thus seems the most likely time suggested by historical considerations for the Patras Hoard's burial. (p. 87)

Peter Green refers to the Social War by also calling it the "War of the Allies". (Green, p. 286) The war began in BCE 221 and lasted until 217. In short the was was between the Achaean and Aetolian leagues and resulted in Philip V of Macedon defeating Sparta and her allies. (New Century Classical Handbook, p. 1018).

It appears that the most reliable source identifying this coin as having originated in this hoard is BCD himself, whose cabinet card notes this coin's origin with the Patras Hoard.

The wolf is the well-known symbol of Apollo Lykios, whose worship at Argos dates from very remote times. http://www.snible.org/coins/hn/peloponnesus.html#Argos

Lycius, Lyceius or Lyceus. An epithet of Apollo meaning “wolfish” or “wolf-god”. It refers to his function (as god of shepherds and herdsmen) as wolf-slayer…Danaus made the original temple of Apollo Lycius,…at Argos. ----p. 654 The New Century Classical Handbook, 1962. There is also an allusion to Apollo appearing in the guise of a wolf or that he had sent a wolf to aid Danaus to become king.

Therefore the coin depicts the city’s patron Apollo in the guise of a wolf or the wolf that was sent to aid Danaus in becoming the legendary King of Argos after fleeing Egypt.


A Google Earth Map showing the city of Argos as it is situated in the Peloponnesus: 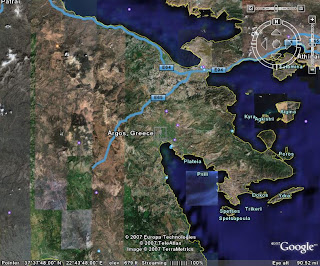