R: vine leaf and tendril and ancient Hebrew inscription: herut ziyyon ("for the deliverance of Zion")

R: Vine leaf on tendril; Hebrew around (Year Two of the Freedom of Israel).

On this example “Israel” is visible on the right though it is misspelled. Meshorer writes that “Some of the inscriptions tend to be in a distorted form, i.e., the letters are not in their right places.”(Ya’akov Meshorer; Treasury of Jewish Coins, p. 163)

Hendin had also noted that the flan had been broken in antiquity. 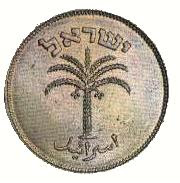