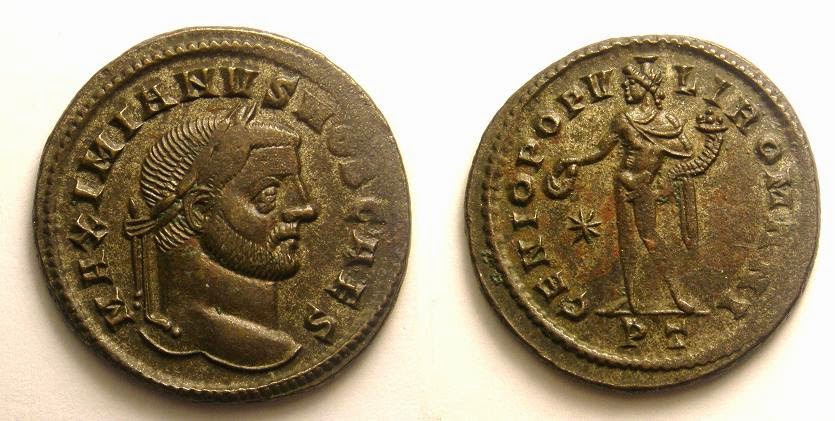 
This is the first Roman coin that I purchased in 1971. My Dad (z”l) paid $1.00 for this coin that I picked out of the dealers $1 pick junk box. Though this particular dealer’s junk box, as I have since learned had some little treasures here and there.

I had no idea as to who was depicted only that it was Roman. Over the next few years I patiently tried to figure out the incomplete inscriptions, and eventually with the aid of some dealers illustrated lists I determined that the coin likely belonged the the 4th century CE.

I continued my patient pursuit for something tangible to identify the coin, since there were limited if any sources available at my local libraries. My first breakthrough came when I deciphered the DN, and learned through my research that this was an abbreviation for Dominus Noster, “our lord”….with that I figured that the name of whoever was depicted would likely follow that title.

The hunch paid off when I read G-R-A-T-I.

With this less than confident reading, and the thought that this coin belonged to the 4th century, I picked up my 1971 World Almanac and looked for the regnal lists of the Roman Emperors.

Just to be sure I began with Augustus, the first name on this list and methodically worked my way down becoming ever more disheartened since I couldn’t match the letters I had with any name encountered…then I came to Constantius II 337-361, Julian II 360-363, Jovian 363-364, Valentinian I 364-375, Valens 364-378, Gratian 367-383, Valent…..wait a minute….I looked again and noted G-R-A-T-I….A-N…..That was it!! After nearly three years of on again off again often tenacious searching through very limited resources, I had finally determined that the coin likely belonged to Gratian CE 367-383.

This was all finally confirmed when I went to the public library in a nearby city where they had an old copy of the 1964 Roman Coins and their Values. I looked under Gratian and was able to determine what the reverse ultimately was and there you have it.

Shortly after that, once I had enough confidence to feel that I could conquer my next purchase, I returned with my Dad (z”l) to the same shop and made more purchases, patronizing the shop until around 1980 or thereabouts when the shop closed and the owner passed away shortly thereafter. The efforts put forth in determining the identity of this coin have paid off with every purchase acquired since. It is always more rewarding to purchase a lot of unidentified coins and apply the skills I learned so long ago with this one small and common coin of Gratian. It has remained a priceless reminder of how much enjoyment can be gathered for such a small expense.
Posted by JG at 19:15 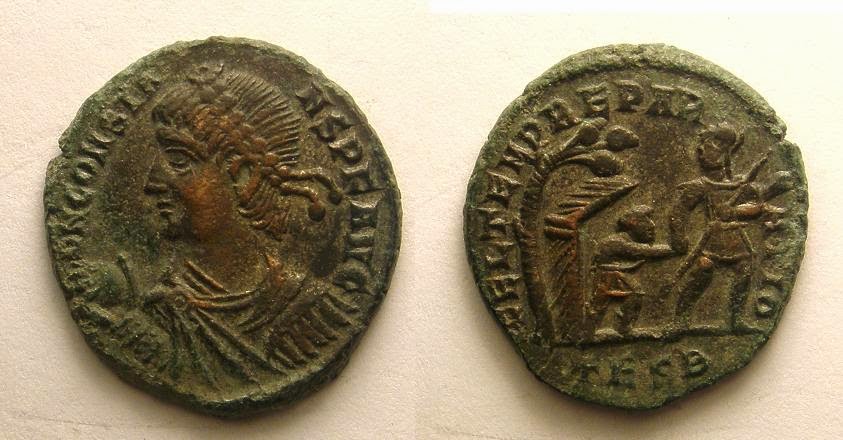 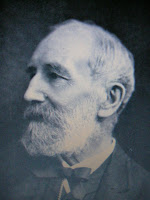 Photo of Dr. Augustine Shurtleff around 1900, taken from a family history found on Google Books.

R: inscription in wreath, VOT/XX/MVLT/XXX in ex SMANZ
Posted by JG at 19:12 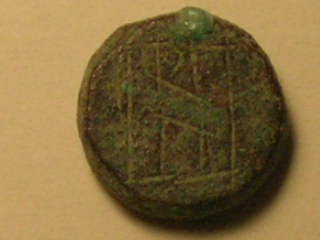 O: Large N carved into surface indicating the weight as that of a “NUMISMA”
R: plain

Commemorative of the 1000th anniversary of the founding of Rome during which they celebrated the LUDI SAECULARES or "secular games". The series by the family of Philip I is thought to depict many of the types of animals that were gathered together for the games and related processions. 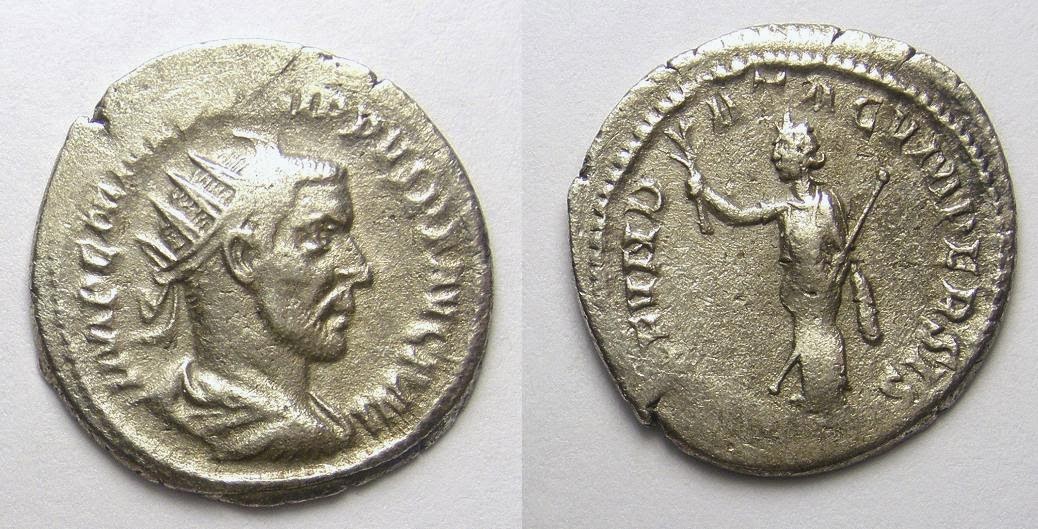 Commemorates Philip’s peace agreement after the death of Gordian III, the PM in the obs inscription refers to his title as “PERSICVS MAXIMVS” 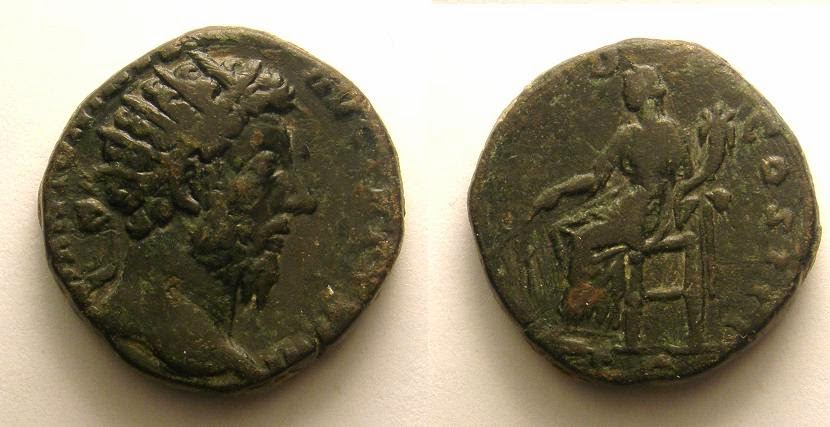 Reverse refers to vows made for Aurelius’ safe return before setting out on his German campaign.

Propagandistic reassurance to the Roman populace that the North African corn supply was safe after the defeat of Pescennius Niger.

O: IOY/ΛIAAΓ/PIΠΠI/NA within a wreath tied at the bottom with an X.
Julia Agrippina was the wife of Claudius and mother of Nero. 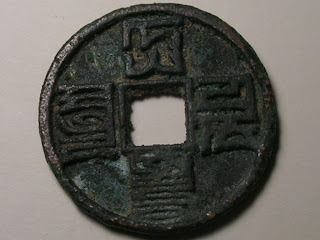 According to Ann Paludan, Khaishan was “…a military hero from the steppes,…Utterly untrained in state affairs, he behaved like a nomadic chieftain. Bestowing honours and titles indiscriminantly, he appointed actors, butchers, Buddhist and Daoist clergy as ministers of state, and artisans as ‘dukes’ or ‘councillors’. Wildly extravagant, he lavished money on his palaces and Buddhist temples, supplementing revenue by selling licenses in the state monopolies and tripling the amount of paper money.” (p. 156)
Posted by JG at 08:54

The Kai-yuan is the ubiquitous currency of the Tang period. Schjöth remarked that he even encountered them during his tenure in China in the 19th century (p.22).

Schjöth also states that the Kai-yuan “were practically minted uninterruptedly for three hundred years.” For the entire Tang period.
Posted by JG at 08:51 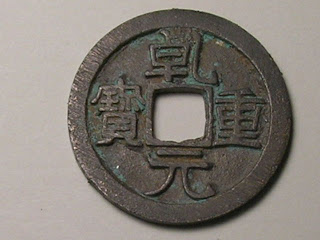 According to Schjöth “In the 1st year of Chien-yuan (A.D. 758) the chief minister, Ti Wuchi, was commanded to cast at Chiang-chou (in Southern Shansi) Chien yuan chung paos, which had double rims, and were to circulate jointly with K’ai-yuans, one representing fifty. This causing much hardship on the public, the value was reduced to thirty and even less.” (p.22)

“The reign of Suzong (756-762) and that of his eldest son, Daizong (762-779) , were dominated by the An Lushan rebellion which lasted until 763, and the records of that decade are biased and incomplete. Both emperors followed a policy of clemency towards the rebels, leaving local leaders in power, thus increasing provincial fragmentation. The population census fell from nearly 53 million in 754 to 17 million in 764 and the Tang dynasty never recovered from the devastation.” (p. 112-Paludan, A. Chronicle of the Chinese Emperors, London, Thames & Hudson, 1998).

According to William Langer’s Encyclopedia of World History, An Lushan was “…a Turkish adventurer who had been adopted by the emperor’s favorite concubine,….and had united three military commands, plunged the empire into particularly sanguinary and destructive civil war.” (755, page 364)
Posted by JG at 07:20