According to VanMeter this coin refers to the reconquest of Asia Minor from Antony in BCE 30. (p. 66)
Posted by JG at 20:11

Ex: Amphora
for some info on Gadara, try this site: http://research.haifa.ac.il/~mluz/gadara.folder/gadara2.html#hist
Posted by JG at 20:09

RCV lists at £ 170 in Fine condition, RIC lists this coin as Rare.

The reverse inscription is the only time this inscription was utilized during the entire imperial period for a couple issues related to Diva Faustina. The Latin inscription means “Received by the stars”. A very poignant wish by her surviving husband, Aurelius.

Ex: Amphora via a lot of 15 Roman bronzes

AE 3, 2.95 g, London mint, CE 321-322
RIC 224 (R3)
O: CONSTANTINVS AVG
R: BEATA TRAN-QVILLITAS/VOT/IS/XX/ PLON
Ex: Dr. Tom Buggey (TN)
cf. his website: http://tjbuggey.ancients.info/romeae2.html
The above photo is Dr. Buggey's.
He had the weight listed as 2.76 g, but weighing this on different scales revealed a weight as noted above. What the photo does not reveal is the pleasant green patina on the coin.
Posted by JG at 20:07 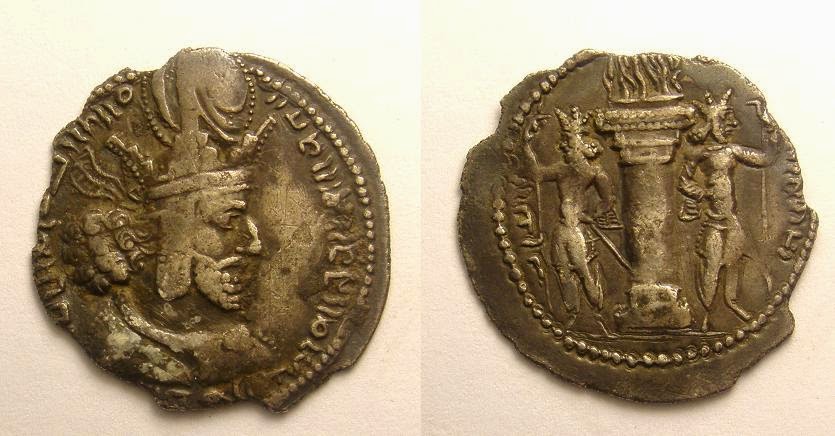 Famous sculpture of Shapur I and Valerian in captivity at Naqsh-i Rustam, Iran.
For more info on Shapur I try:
http://www.cais-soas.com/CAIS/History/Sasanian/shapour_I.htm 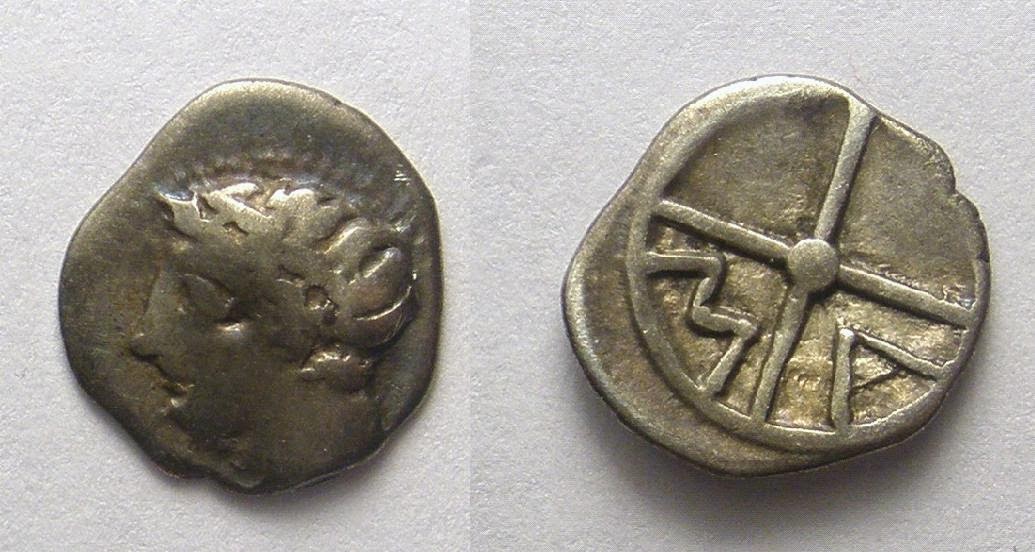 According to Sear’s Greek Coins, Ariobarzanes II was the son of Ariobarzanes I (BCE 95-63). He married Athenais, a daughter of Mithradates VI of Pontus. After a troubled reigh of little more than a decade he was assassinated by members of a pro-Parthian faction. (p. 688)

The coins of this ruler appear to be among the harder to locate pieces for this particular series,
in fact according to Simonetta, this coin is R4 (extremely rare), He notes examples in his own collection and that of Cabinet des Médailles only. This example would be a 3rd, wildwinds has another (4th), and therefore at a minimum there appear to be 5 extant examples of this type, though it could reach a maximum of 11 examples if we were able to determine if the four noted at the ANS are all year 7 or mixed 7 & 8.
A problem with assessing the total number arises as Simonetta notes due to "...most...that have reached us bear a date 'off flan'." (B. Simonetta, The Coins of the Cappadocian Kings, p. 43).

Ex: Amphora
Mildenberg states the following about this issue: " The other issue in the third group of Aelia coins, that with the portraits of Sabina, however, carries the curiously abbreviated legends IMP CAE TR HAD AVG and SABIN AVGVS on the obverse and reverse respectively. If this issue belongs to Aelia--and there is some question since the city is not mentioned in the legends--as indeed seems likely (BMC p. 83, 4-5: "Attribution conjectural, but favoured by fabric and style"), then it must have been struck before Sabina's death around autumn 136 because she is still not DIVA. This means that the Sabina issue was struck either during the ten to twelve-month period before the end of the war and the death of the empress or before the war between 130 and autumn 132, like the first group of Aelia coins."
----Mildenberg, L. Typos VI The Coinage of the Bar Kokhba War, 1984, pp. 100-101.
Posted by JG at 14:09

The dealer from whom this coin (and an Ayyubid dirham from Halab as well) was purchased, literally had several large jars filled from top to bottom with ancient and medieval coins, many still with the dirt on them. The jars took up much of the space in his small market stall which was not well lit as I recall it.

Ten Sheqels at the time was equivalent to about 6 USD, this being the final negotiated price down from twenty Sheqels each. My only regret is that I didn't have more time in the gentleman's store to explore at least one of his several jars to see what other interesting items he had had.