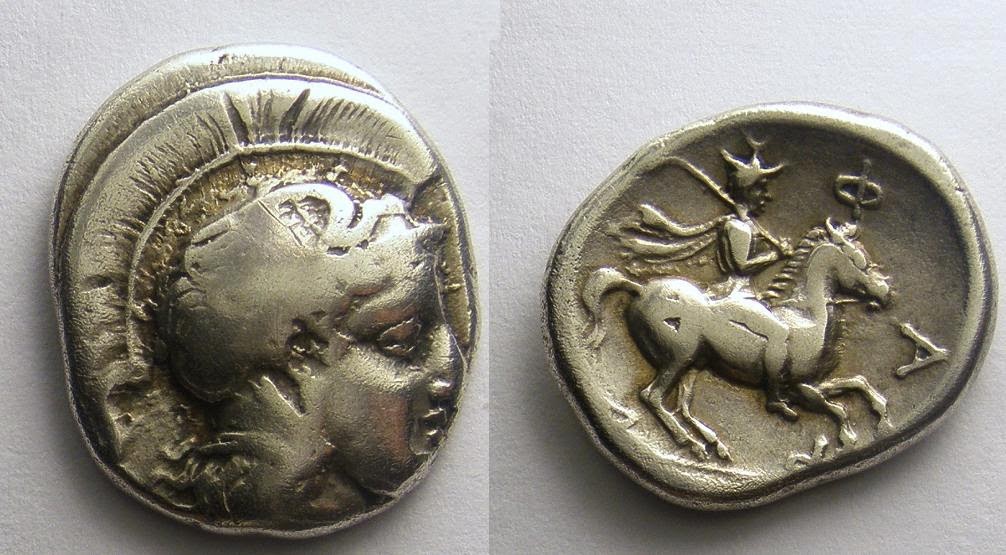 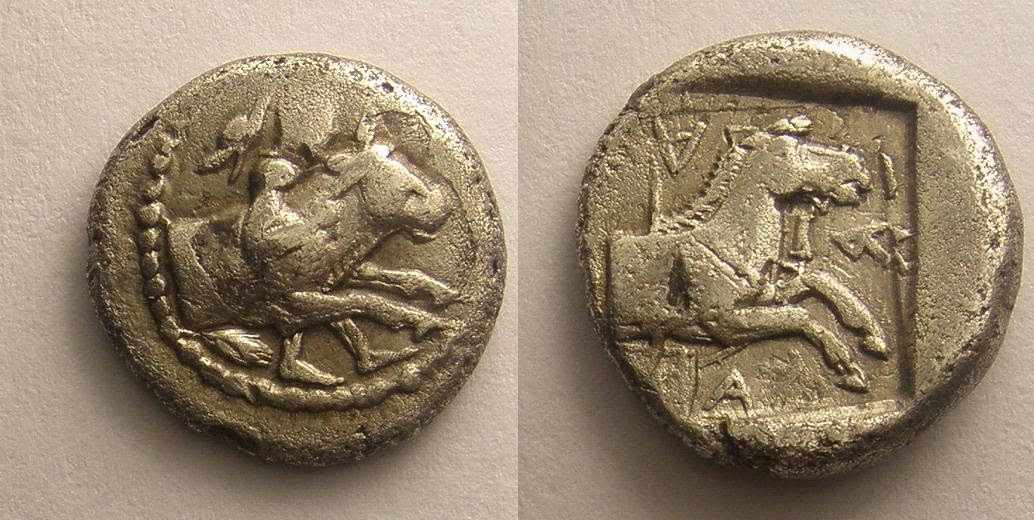 
CNG sold one similar example to the coin depicted in MBS 57 lot 295 (4 April 2001) that is quite similar in style and rendering, CNG notes that the coin is "very rare"

The depiction on this coin (and its related types) refers to a sport, much in vogue in Thessaly at the time of its minting. A youth would ride a horse to the bull and then propel himself off the horse and onto the bull literally grabbing the bull by the horns in order to try and bring it down. (info based in part from this website: http://www.infomonnaies.com/fr/monnaie/show-2e-Monnaie-Antique-Grecque-Thessalie.htm)


Another thought is perhaps similar to Jason (of the Argonauts fame) performing the same feat to yoke two bulls to plow a field. This story of course appears somewhat later then these coins though there may have been a local tradition just the same, especially since Jason was a local Thessalian hero. For all we know, this depiction may not have been referring to a sport in vogue at the time at all, but to the legendary Jason himself(??) comments in this regard are welcome. 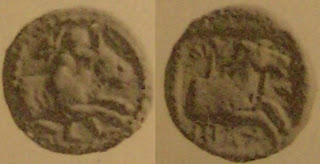 
More on the type:

“…the fifth century coins of Crannon, Larissa, the Perrhaebi, Pharcadon, Pherae and Tricca. They have on the obverse a youth seizing a struggling bull by its horns, while on the reverse is a bridled horse. The meaning of the former type has never been doubted since it was first pointed out by Eckhel. But I do not think that the latter has yet been adequately explained. It is usually regarded independently and taken as a symbol of Poseidon. And it is certain that it did come to be looked upon as a thing by itself. I strongly suspect, however, that the designer of the first of these coins---for all are copied from a common original---had a different idea in mind. He intended the two sides to be complementary and the horse to be the horse from which the matador had just dismounted to dispatch his victim. It must be remembered that the horse was an important actor in the drama, and that without him we should not have the whole picture. Nor would there be anything singular in so intimate a connection between obverse and reverse. We need not go beyond Thessaly itself for a parallel. A fourth century drachm of Larissa has on the one side a bull in full career and on the other a galloping horseman in Thessalian garb. Taken together, these two types present us with a sketch of the first stage of the ταυροκαθάψια exactly as described by Suetonius.

[Note: Suetonius Claudius 21, discussing the Saecular Games held by him, Suetonius writes: …and a show in which Thessalian horsemen drove wild bulls across the arena, tired them out, leaped on them, seized hold of their horns and then threw them to the ground.]


It is sometimes said that the bull-fight has a religious significance on coins, inasmuch as performances of the kind were given at games held in honour of Poseidon ταύρεος. But at the best this would be a strangely indirect way of appealing to the god to bear witness to the soundness of the currency. And in any case the inference could hardly be admitted unless it were proved that it was only on the occasion of the games that the coins were minted. There is no evidence to support such a view.”


In many of the 19th century sources this coin (or those like it) are noted on a Rarity Scale as being an “R7” or extremely rare, though not unique or nearly so.

According to CNG the coin is “very rare” thereby signifying that there are perhaps 50 or less known. Though it could well be 30 or less.

This particular type for this particular locale has been noted only selling once in 2001 as noted above via CNG (obviously I suspect there are other sales in the past but have not checked them yet).

The following collections do not list this particular coin with the youth behind the bull:

If you can note a resource where this coin is noted, please provide the information accordingly, by writing to me at yofijr@hotmail.com

"The Classical city has been identified with fortifications on an isolated hill above the modern town of Klokoto. The walls, of ashlar with some Byzantine repairs, circle the W and lower of two peaks. The line of the wall runs E along the saddle but turns S to the plain without enclosing the higher peak. The city presumably extended into the plain but has left no visible remains."
Posted by JG at 18:51 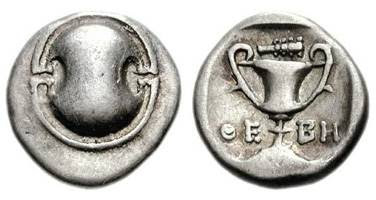 Obv: A Boiotian shield.
Rev: θ E - B H A wine kantharos with club of Herakles above all within an incuse square. 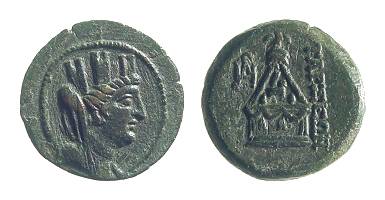 SNG Levante 944 (this coin is the plate specimen, cf. plate photo below)

Strabo mentions specifically this issue of bronze coinage from Smyrna when, discussing the city, he says "there is also a library; and the 'Homereum', a quadrangular portico containing a shrine and wooden statue of Homer; for the Smyrnaeans also lay especial claim to the poet and indeed a bronze coin of theirs is called a Homereum" (Strabo, Geographica XIV, I.37, transl. by H.C. Jones, The Geography of Strabo, VI [Loeb, 1960], pp. 245-247). (http://cngcoins.com/Coin.aspx?CoinID=58802)