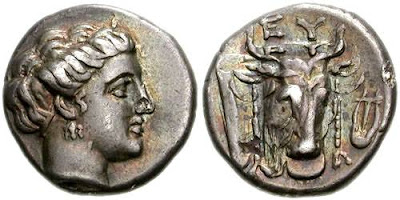 Acquisition : 2007
Tantalus ID#35549
IGCH 164 notes that the hoard was deposited c. BCE 250 and that the contents were 66+ silver coins, consisting of Euboean League Drachms. Disposition was to a private collection in Athens.
On page 99 of Wallace he writes that "This issue was probably struck in 302 [i.e., BCE], when Demetrius Poliorketes was assembling his forces at Chalkis."

"5. Hoard in private possession in Athens in 1952. 66+ AR.
All in the lot shown to me were Euboian League drachms:

Two of these coins did not come from the hoard, but which two was uncertain. No information was available about date or place of finding. I was able to weigh and examine these coins (which had apparently been cleaned, but were in good condition) and to observe that those without symbol seemed somewhat more worn than those with the grapes symbol; both of these were more worn than those with the kantharos, lyre, or satyr's head, the distinction between which was not clear; and those with the dolphin were the least worn. The coins are all entered in the catalogue." 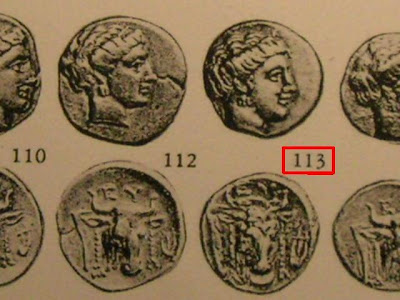 On page 101, Wallace writes "...a very high percentage of those struck from the later dies (as numbered here) are double struck, some so slightly that it is not easily noticed except with a glass, but many very badly double-struck (e.g., no. 113 on Plate X) . It almost looks as if, for some reason, less competent workmen used the later (?) dies, and struck far fewer coins with them, much less well."

According to Sear, Eretria (became the capital and mint of the Euboian League, formed in 411 BC), Greek Coins & Their Values, Vol. 1(1978), p. 231. That was according to Wallace it's initial formation. 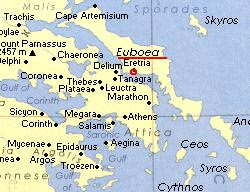 Map showing location of Euboia/Euboea as well as Eretria.