Symbol (as ground line) Horizontal Anchor with flukes on the r.

O: Herakles in lion skin headress r.
R: [AΛ]EΞANΔPO[Y] between club above and mostly off flan, and gorytos below. No visible control/mint marks.

In SC I V II, p. 50 it is noted for C/M 16 "Caduceus" that SC 22.2 is not noted among the c/m issues, though the c/m is described as "caduceus in elongated rectangular punch...Reverse, beneath bull" as is noted with this issue. As for the locale where the c/m was applied the following is stated: "Either applied at Europus (Dura), or applied at Antioch to identify a batch of coins consigned to Dura."

This may be supported by the fact that the coin was in fairly good condition when the c/m was applied therefore indicating that the coin could have had the c/m applied while still at the mint or shortly after being delivered to it's destination from the mint.
Posted by JG at 14:17

O: laureate hd of Apollo r, with wavy locks on back of neck, dotted border. 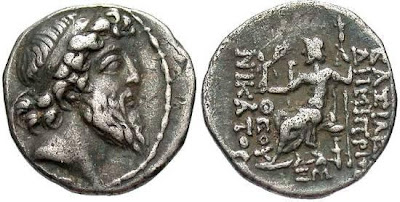 R: BAΣΙΛΕ[ΩΣ] ΔΗMHTPIO[Y ]in two lines on r., ΘEOY NIKATOP[OΣ] in two lines on the l., Zeus enthroned l resting on sceptre and holding Nike inside inscription, facing r., offering wreath to Zeus. Controls in ex., primary on the left Ξ, then AM (?) to r.

This coin is the plate coin for SC 2167b in SC II found in Plate 40 though is incorrectly identified as De Clercq 203, when in fact it is not. De Clercq 203 can be viewed at this link at the BNF as it remains in the BNF collection and the example noted above is superior to the BNF examples.
https://gallica.bnf.fr/ark:/12148/btv1b8574723w

CNG noted that this coin was "Rare" as well as the following:

"Newell, in SMA, analyzed the coinage of Demetrios' second reign at Antioch: It was a large, but short, issue probably struck to fund his military campaign to help Cleopatra II take Egypt from Ptolemy VIII. After Demetrios departed, however, Antioch revolted, allowing an Egyptian army to enter and install Alexander II Zebina as king. Unable to regain the northern part of his kingdom, Demetrios was murdered in Tyre. The fact that this issue shares the same obverse die with a wide variety of reverse dies supports Newell's theory of a short, massive coinage."

CNG was likely in error noting that it was struck circa "126/5 BC". Demetrius had vacated Antioch in BCE 128. 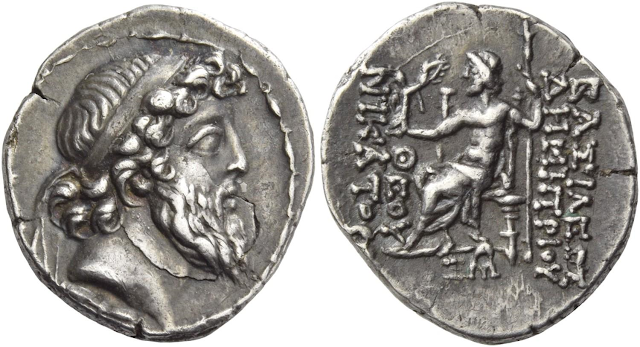 This is another example of the same coin likely from the same dies but certainly same reverse die since the die crack that extends from 10-12 o'clock on the upper left is apparent in the above example as it is in this example.

O: Shahada with struck at Brusa 806

Cf. link to similar coin that went unsold at auction, the example above is nicer with a fuller strike and fuller inscriptions. http://www.coinarchives.com/w/lotviewer.php?LotID=618571&AucID=445&Lot=7199