CNG Research site noting the Houghton/Lorber article in the NC 2006, "Cappadocian Tetradrachms in the Name of Antiochus VII". The CNG note (appearing under EA 167 Lot 58) states: "Lorber & Houghton identify a series of Seleukid style tetradrachms that are linked to the Cappadocian regal series by shared control marks and hoard finds. The series belongs to the confused period in Cappadocia after the assassination of Ariarathes VI around 112 BC, when Mithradates VI of Pontus and Nicomedes III of Bithynia contended for influence over the strategic kingdom. Nicomedes had married the widow of Ariarathes VI, but Mithradates drove both of them out and installed Ariarathes VII as a puppet ruler, only to have him murdered a few years later. The tetradrachms were probably struck to pay the mercenary armies employed during the time of troubles."

This coin bears the same control marks as a Tetradrachm struck by Ariarathes VII in his own name, therefore the attribution.

Frankly, I obtained this as an Antiochus VII Tet. but am satisfied that it depicts the object of my search as well as being something a little more interesting and an historically fascinating attribution besides. 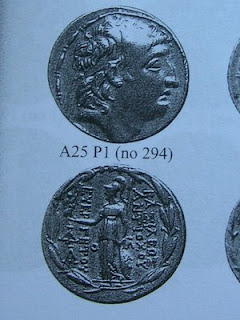 Photo from the NC article showing #294, this coin.


According to an email from Alan Humphries (UK) "Your coin appears to be no 294 (p.74, obv. die A25, rev. die P1) in their listing, illustrated on Pl.17, and noted as coming from a 1990 hoard." He later added when asked if 294 was indeed this coin "If yours weighs 16.39 gm then I am certain it is No.294: if it differs very much from that then we are in the territory of cast fakes, but the illustration on pl.17 appears identical to your piece. The exact provenance of the 1990 hoard is uncertain, but Turkey/northern Syria is the rough area." When advised that there was a +0.02 to +0.03 g difference he felt that this was within the realm of error as his was +0.01 g on his scale.

Much thanks to Alan Humphries for a copy of the NC article and his emails and please visit a site and museum Alan is associated with http://www.thackraymuseum.org/
Posted by JG at 13:41