O : diad hd of Demetrius r., one diadem end flying up behind, the other falling forward over shoulder, dotted border.

R: ΒΑΣΙΛΕΩΣ ΔHMHTPIOY in two lines above, TYPIΩN and Phoenician inscription “of ” in two lines in ex., stern of galley, date above, dotted border. 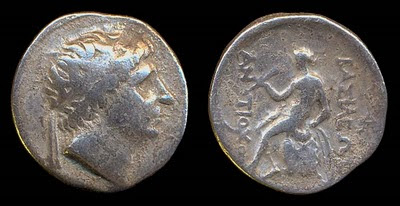 Greece/Seleucid; Antiochus I Soter BCE 280-261, in the name of Seleucus I 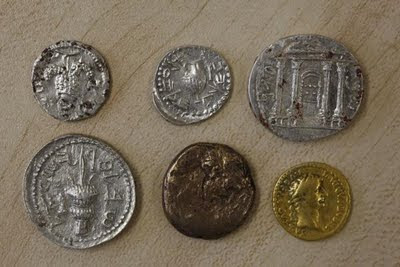 Examples of coins found in this hoard (top 3 and bottom left are Bar Kokhba era, bottom center is a coin of Hadrian [Gaza?] and an aureus of Tiberius)

I would also post Ha'aretz' but their coverage was very poor and included horribly incorrect info such as the hoard included Roman gold coins "minted in Israel as well as throughout the Roman Empire." Perhaps the reporter needed space filler knowing that the average reader wouldn't fact check, just like the Ha'aretz editor.

Great pix of some of the coins found in situ and after cleaning (in the first article posted). Other than a couple statements verging on hyperbole, the article is generally OK, though it may be the largest find of the period found by archaeologists, not the largest if private finds are considered and one consults Mildenberg.

"Prof. Frumkin pointed out the significance of the particular cave, near the site of ancient Beitar, which was the site of the “last stand” of the rebels led by Bar-Kochba in their struggle against Roman rule in Judea from 132-35 CE. "
Posted by JG at 09:22

Not quite my usual post, though I have always had a weakness for interesting stories and these are examples for sure: 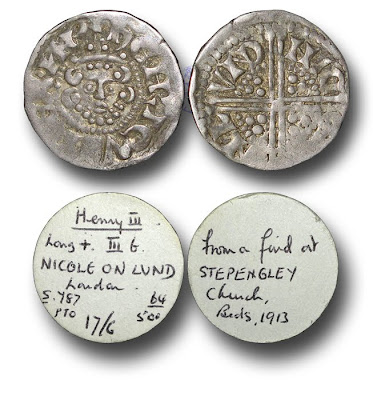 (deposition c. CE 1270 according to Michael Dolley & W.A. Seaby “The Anomalous Long Cross Coins in the Anglo-Irish Portion of the Brussels Hoard” p. 294, Mints, Dies and Currency: Essays Dedicated to the Memory of Albert Baldwin By R. A. G. Carson, 2006) 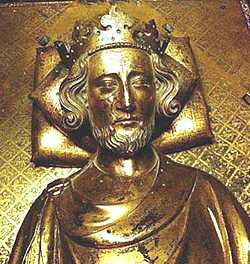 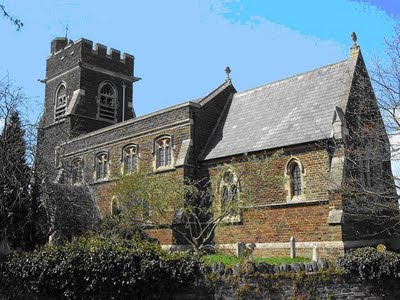 The church of St. Lawrence, rebuilt in 1860 by the Duke of Bedford and the rector, is a building of local sandstone in the Early Decorated and Perpendicular styles, consisting of chancel, nave, north aisle and a tower containing 4 bells : it is seated with open oak benches for 240 persons. The register dates from 1562, but is continuous only from 1647.

13th Century: The church consisted of a chancel, nave, north and south porches and west tower. It was said to be the smallest church in the county. The Gentleman's Magazine of 1849 said "it is probably the smallest in the county with a low tower not rising above the neighbouring hayricks."


1858-60: The east wall of the chancel collapses and brings down most of the church with it. The Duke of Bedford agreed to rebuild the church and commissioned Henry Clutton. Work began in December 1858 and the new church was opened on the 19th October 1860.

1912: During restoration work on the church a hoard of 13th century silver coins were found beneath the chancel floor. 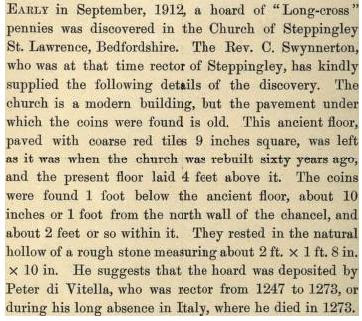 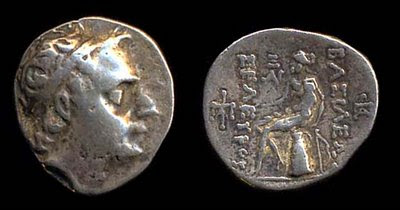 O: diad hd of Antiochus IX r, with short curly beard, one diad end waving up behind, the other falling forward over shoulder, dotted border.

Controls: N with line above.
Symbol: aphlaston
Posted by JG at 17:44 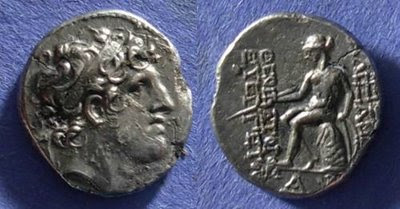 Controls in ex., primary on left.

R: ΒΑΣΙΛΕΩΣ ANTIOXOV in two lines on r, ΕΠΙΦ[ΑΝΟVΣ ]on l., filleted double cornucopiae. Control on outer left (off flan) and no other discernable marks.