Great timelapse video of the excavation

According to a note at Flickr, this was compiled from three days worth of photos.
Posted by JG at 15:09

or for even better coverage click on the link below to the PAS website for great coverage of this interesting and important find: 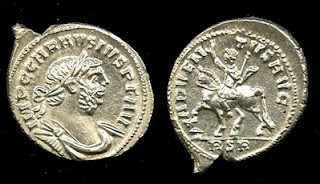 By ROBERT BARR, Associated Press Writer Robert Barr, Associated Press Writer Thu Jul 8, 6:39 am ET
LONDON – A treasure hunter has found about 52,500 Roman coins, one of the largest such finds ever in Britain, officials said Thursday.
The hoard, which was valued at 3.3 million pounds ($5 million), includes hundreds of coins bearing the image of Marcus Aurelius Carausius, who seized power in Britain and northern France in the late third century and proclaimed himself emperor.
Dave Crisp, a treasure hunter using a metal detector, located the coins in April in a field in southwestern England, according to the Somerset County Council and the Portable Antiquities Scheme.
The coins were buried in a large jar about a foot (30 centimeters) deep and weighed about 160 kilograms (350 pounds) in all.
Crisp said a "funny signal" from his metal detector prompted him to start digging.
"I put my hand in, pulled out a bit of clay and there was a little radial, a little bronze Roman coin — very, very small, about the size of my fingernail," Crisp said in an interview with the BBC.
He recovered about 20 coins before discovering that they were in a pot, and realized he needed expert help.
"Because Mr. Crisp resisted the temptation to dig up the coins it has allowed archaeologists from Somerset County Council to carefully excavate the pot and its contents, ensuring important evidence about the circumstances of its burial was preserved," said Anna Booth, of Somerset Council.
Somerset Coroner Tony Williams scheduled an inquest Thursday to formally determine whether the find is subject to the Treasure Act, a formal step toward determining a price to be paid by any institution which wishes to acquire the hoard.
The hoard is one of the largest ever found in Britain, and will reveal more about the nation's history in the third century, said Roger Bland, of the British Museum. The find includes more than 760 coins from the reign of Carausius, the Roman naval officer who seized power in 286 and ruled until he was assassinated in 293.
"The late third century A.D. was a time when Britain suffered barbarian invasions, economic crises and civil wars," Bland said.
"Roman rule was finally stabilized when the Emperor Diocletian formed a coalition with the Emperor Maximian, which lasted 20 years. This defeated the separatist regime which had been established in Britain by Carausius.
"This find presents us with an opportunity to put Carausius on the map. School children across the country have been studying Roman Britain for decades, but are never taught about Carausius our lost British emperor."
The discovery of the Roman coins follows last year's discovery of a hoard of Anglo-Saxon coins in central England. The so-called Staffordshire Hoard included more than 1,500 objects, mostly made from gold.
The Portable Antiquities Scheme is a department of the British Museum which deals with treasure finds.
Posted by JG at 08:18

Here is the link to the plates for the Hermann Weber Collection texts that we linked to a while back. This link should now make the 3v online Weber complete. Just cut and paste.

http://people.virginia.edu/~jdk3t/WeberPlates/
Posted by JG at 04:53