On 9 Oct. 1991 Curtis Clay (who is revising RIC for Septimius Severus and family) wrote to the prior owner stating that this example was only the second known example. The G. R. Arnold collection did not have one. (CNG sold an example in 2013 for $2,200).

an example of this coin sold at Gemini X (2013)  lot 664 ex: Harry N. Sneh Collection. The note accompanying that example stated "Very rare with portrait left, a variant first reported in ASFN 1884, p. 175. RIC 41 cites another specimen from Boric-Breskovic's catalogue of the Belgrade collection; ours could be only the third recorded."

The example depicted here appears to be the fifth recorded.

The other four were the Gemini example, an example sold by CNG in 2012 and an example posted on Forum Ancient Coins Gallery that had been acquired from the French firm CGB in 2012 and a fairly worn example from the ANS OCRE site from the Museu de Prehistòria de València , that was part of the 1990's Llíria Hoard (http://nomisma.org/id/lliria_hoard).
Posted by JG at 12:04

IRAN/Sasanian; Examples from a Hoard from the time of Yazdgard III in Kirman c. CE 642-645/6

The hoard has invariably been referred to as the "Silk Road Hoard" or the "Tokharistan Hoard" but was described in great detail in an article entitled "A Hoard from the time of Yazdgard III in Kirman" by Heidemann, Riederer & Weber ( Iran 52 (2014): 79-124).

As these examples are studied further I will be updating their respective information. These are both drachms minted posthumously in the name of Khusro II (CE 590-628) and are thought to have been minted at a centralized mint of Yazdgard III sometime after the Battle of Qadisiyya and possibly just before the Battle of Nihavand during the early days of the Muslim conquest of the Sasanian Empire. 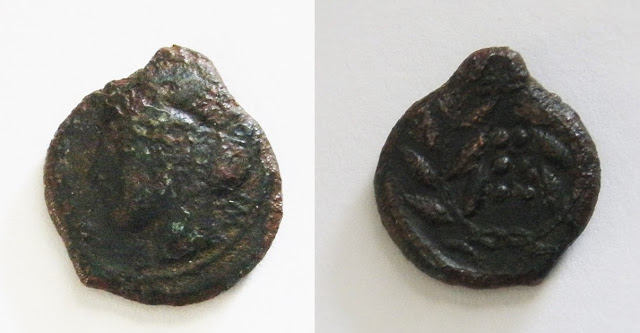 
O: Hd of nymph left six pellets before.
R: six pellets (Mark of Value) within wreath
Posted by JG at 13:37