obtained in change during a trip to Barcelona and environs in August 2018.

While in Catalunya, we encountered Euro coins from nine different issuing countries; Belgium, Germany, Spain of course being the majority content usually, Ireland, France, Greece, Italy, Austria, and Portugal. France, Germany and Italy came in next in the quantity of types and denominations available.

Spain was available 45-60% of the time, with the rest being French, German or Italian and a smattering of the other countries named. I would say the latter three were available in equal measure most of the time. We found it strange that when we traveled to Girona about 60km from France we noticed a greater availability of Spanish euro coins in our change than in other locations we had traveled to. One would think that there would be a greater availability of French euro coins that close to France but there wasn't in our unscientific observations.

We noted a number of 2 euro commemorative coins available in our change such as the proclamation of Felipe VI as king in 2014 which is a dual portrait coin with Juan Carlos (LV-G275). The other was an Italian 2 euro commemorating the 200th anniversary of the birth of Verdi in 2013 (LS-G112).

A favorite of ours by design was the Italian 2 euro depicting Dante. Of all the euro designs this coin in our opinion is a masterpiece and likely the stand alone stand out of the circulating euro coins. It is indeed a beautiful coin in our opinion. 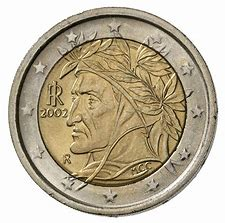 
Purchased at the regular Sunday Stamp and Coin Bourse at the Plaça Reial in Barcelona's Barri Gotic
on 26 August 2018. The bourse runs from around 9 am until 2 pm. There are maybe a dozen or more dealers and it appears to be an active well attended event. I found everything I was looking for and for very reasonable prices as well. 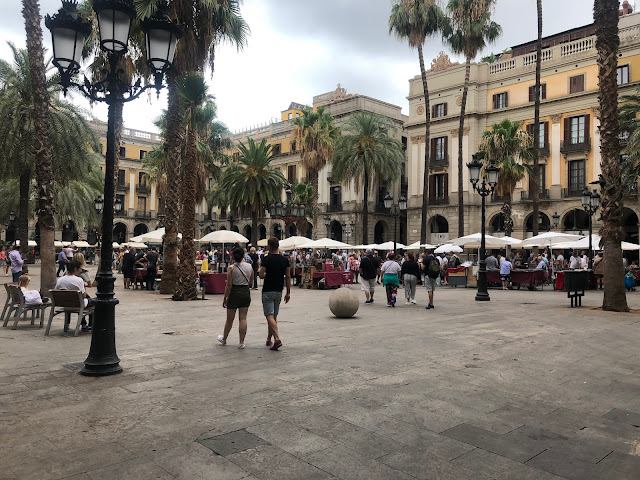 Every Sunday Stamp and Coin Bourse on 26 August 2018 at Plaça Reial  in the Barri Gotic off of La Rambla in Barcelona.
Posted by JG at 17:56

a number of dings along the rim.