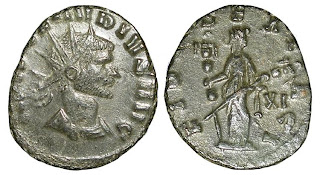 Ex: gift from a friend CUd

New Variety of SC 361.3b Identified

Please follow the link below to visit the page with this particular new variety:

According to an email from Arthur Houghton, this coin is "...clearly a variant of SC 361.3b, and to my knowledge has not been recorded."
Posted by JG at 10:37 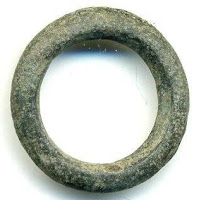 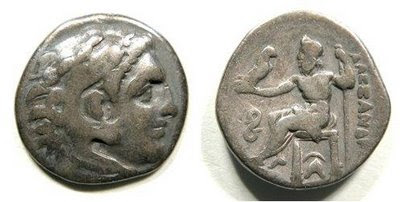 
Dealers Note: Fine condition. Ex collection of John Quincy Adams and his descendants, donated in 1913 by Henry Adams(1838-1918)to the Massachusetts Historical Society, and later auctioned by Stack’s on 5 March 1971. The prior owner’s notes indicate that the coins appeared in the aforementioned Stack’s sale as lot 150 (multiple coins). Although this coin and the companion drachm of Philip III (see 1338 Mp) are not accompanied by any original documentation, I have no reason to doubt that they do indeed come from this important sale. The coins are deeply toned in the same hues, are in similar grades, and were probably found in the same hoard. 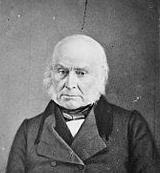 Notes from Harvey Stack regarding the collection:


Few know that the Adams family also had a coin collection. The numismatic items were first stored at the Society, never even being fully inventoried or studied. The 1950s the collection was moved to the Museum of Fine Arts in Boston (MFA) to be reviewed and evaluated. Because of its size, this job was slowly worked on. As it was not fully catalogued or available, and funds and people were not available to do this, the collection was considered to be sold. The project was proposed by the MFA.Under the supervision of Cornelius Vermeule, the numismatic curator of MFA and later director of the museum, together with the assistance of Mary Comstock, also of the MFA the collection of coins, medals and other numismatic material was catalogued. After this work was done, it was suggested that the collection be sold at public auction in order to provide the funds to properly microfilm and preserve the entire document collection.My company, Stack's, with our vast experience in dealing with numismatic treasure held by museums and educational institutions, was selected to sell the coins of the Massachusetts Historical Society, which had been assembled by the Adams' family from generation to generation.As to the formation of the collection, it began with the acquisitions of John Adams. He represented Massachusetts at the Continental Congress, from which evolved our Declaration of Independence together with the forming of the United States. His sons continued the numismatic interest.Adams, who later became the second president, in the 1770s and 1780s was not only a delegate to the Continental Congress, but he was also sent to Europe to solicit aid and finances from France in helping the new nation establish itself. While in Europe, because of his interest in coins, he and his son John Quincy Adams (who became our sixth president) assembled coins as they related to history, from the time of the Greek and Roman civilizations, up to the period they lived in.The entire family was quite literate, each having had a Harvard education. They wrote to each other from near and far, telling each other in letters, diaries and documents of their travels. Their writings reflected details of the times they lived in. These narratives are cherished as historical treasures today.An interesting story deserves telling. Norman Stack, my cousin, and I went to Boston to pack up the collection for shipment to New York. The coins and medals were housed in large wooden cabinets, each having some 60 trays to lay out the coins. To secure the collection these cabinets were housed in great storage vaults in a portion of the Museum of Fine Arts. The walls of the vaults were lined with huge display cabinets, some 12 feet high, each containing a quantity of ancient Greek and Roman heads (from statues). There must have been a thousand or more. All seemed to be looking down at Norman and me. All those "watchful eyes" seemed to provide the security for the collection. As there was no table to use for packing, Dr. Vermeule suggested we use the large wooden case in the center of the floor. We asked what was in the case. He told us it was an Egyptian sarcophagus, intact, which the museum hadn't had time to unpack! We remarked, "We guess that's another pair of eyes watching the collection!"After the collection arrived in New York, Stack's prepared a series of catalogs in 1971 and 1973 which offered these numismatic treasures for sale at auction. We were fortunate in obtaining a few photostats of a small inventory of the collection together with a drawing as how the coins were kept in the trays of the cabinets. All were done originally by the Adams family. .. The funds acquired from the sales were used by the Massachusetts Historical Society to photograph and microfilm the papers for permanent record.

cf for more info: http://www.stacks.com/harveystackremembers/archive.aspx
Posted by JG at 20:55 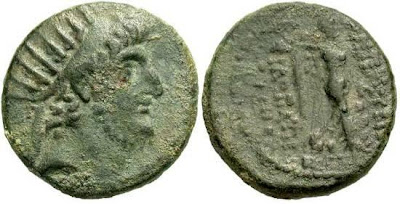 
“One of the commonest of all Sicilian coins is the bronze bearing the head of Poseidon on the obverse, and his trident on the reverse, with IEPΩNOΣ across the field. Enormous quantities of this coin must have been struck, to judge by the numbers found in modern times.”
---- G.F. HILL, Coins of Ancient Sicily (London, 1903) p. 193 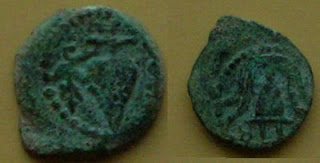 O: bunch of grapes with vine leaf and tendril above HP[ωΔOY]
R: Tall helmet with crest and cheek straps viewed from the front, caduceus below to left and inscription [εΘNAPXOY].