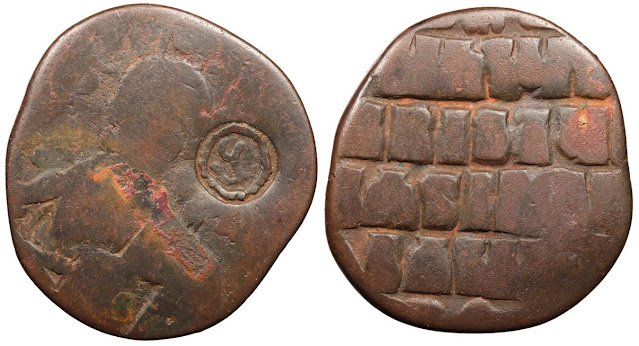 O: one countermark in a circle reading عز

From the dealer’s write up:

This counterstamp is attributed to Izz al-Din, governor of al-Jazirah appointed by Sayf al-Din Ghazi I of al-Mawsil (Mosul). Izz al-Din revolted upon Ghazi's death and took al-Jazirah as independent ruler, a period during which he presumably countermarked circulating coins in his name. This example is struck on a Byzantine anonymous follis attributed to the reign of Constantine VIII, 1025-1028 A.D. This countermark was present on 473 coins in the Mardin Hoard.

The Mardin Hoard was a large group of copper coins found before 1972 in the vicinity of Mardin in modern-day southeastern Turkey. The hoard consisted of at least 13,500 pieces, including around 2,200 Byzantine folles countermarked by local Islamic rulers, as reported by N. M. Lowick, author of 'The Mardin Hoard,' a 1977 book published to document the countermarks found on the coins. The hoard was important in further understanding patterns of circulation and countermarking of Byzantine coins still being used in lands recently claimed by Islamic rulers. Most examples are heavily worn from circulation and many are countermarked several times, some on top of each other.

Ex: A. H. Baldwin & Sons original purchaser of the hoard